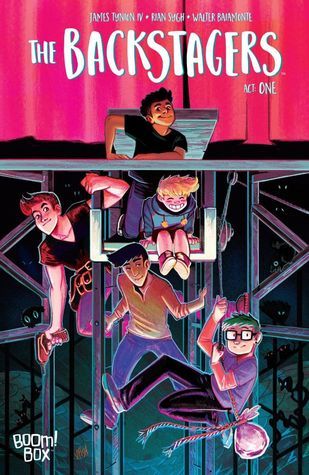 When Jory transfers to the private, all-boys school St. Genesius, he figures joining the stage crew would involve a lot of just fetching props and getting splinters. To his pleasant surprise, he discovers there’s a door backstage that leads to different worlds, and all of the stagehands know about it! All the world’s a stage…but what happens behind the curtain is pure magic!

The Backstagers is a short and cute graphic novel about finding people to fit in with. It has a diverse cast of characters that includes a lot of POC’s, also an underrepresented body type, and it seems like there’s gonna be characters that belong to the LGBTQ+ community, which makes this graphic novel so important in terms of representation.

There is a bit of a mystery that’s introduced in this first issue about rooms and creatures and it seems like it’s gonna be expanding through all the issues of this graphic novel. The mystery and the fantastical elements are definitely what make this graphic novel interesting and intriguing.

Also, it’s worth-noting that this has a really cool art style that goes really well with the story and manages to convey this different sense of space that’s portrait in it. There’s room that shouldn’t be there and corridors that move and that sort of thing, but it’s never confusing because the art style is really clear and shows those elements really well.

Overall, the first issue of The Backstagers is definitely a strong one, it manages to intrigue the reader by introducing fantastical elements in a contemporary setting and it has an incredible art style. More important, it does a great job in terms of diversity by including different types of minorities.

Are you excited to read this book? Have you read it already? Did you like it?

The amazon links in the blog are affiliate links (starting 29/07/2020) and I may receive a small commission for purchases made through my links at no additional cost to you. Using them is an amazing way to support me and my content!