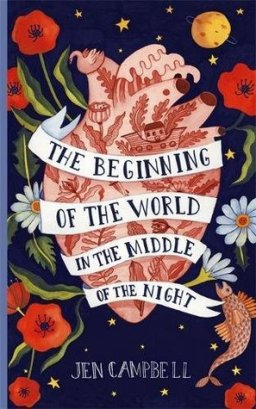 Title: The Beginning of the World in the Middle of the Night

“Spirits in jam jars, mini-apocalypses, animal hearts and side shows.
A girl runs a coffin hotel on a remote island.
A boy is worried his sister has two souls.
A couple are rewriting the history of the world.
And mermaids are on display at the local aquarium.

The Beginning of the World in the Middle of the Night is a collection of twelve haunting stories; modern fairy tales brimming with magic, outsiders and lost souls.”

I read this book for the 7 in 7 Readathon and, especifically, for the challenge to read a book outside my comfort zone. I don’t usually like anthologies and the stories in this one had magical elements, I have never read an anthology with this type of elements before, so those are the reasons I chose this for that challenge. I ended up really enjoying this book, it was really well written, I loved a few of the stories and I didn’t hate any of them, which is always a risk with anthologies. Here are my thoughts about each story:

Margaret and Mary and the End of the World (5 stars):

The Beginning of the World in the Middle of the Night (5 stars):

Have you read this book? Did you enjoy it? Do you want to read it?

6 thoughts on “Book Review: The Beginning of the World in the Middle of the Night by Jen Campbell”